In 1968, I worked at a full-service wash on weekends and was paid federal minimum hourly wage of $1.60 plus whatever tips I was given. Starting pay for a factory job then was $7.50 an hour plus benefits. Forty-five years later, minimum wage is $7.25 — and is worth $2 less today than it was in 1968 when adjusted for inflation. 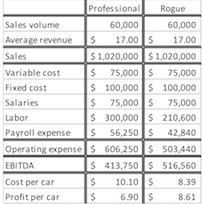 Some of what I remember about the car wash:

• Moved a wheelbarrow piled with chains weighing more than I did

Firms paying labor $7.50 an hour were large corporations, selling products to the world market and their hourly employees were members of unions.

The car wash was a family business, the owner’s wife and two sons worked at the wash. I liked the owner — grandfather type, but crabby. I also liked working at the wash. What I didn’t like was being taken advantage of as mentioned.

Back then, people not college bound or limited to minimum-wage jobs could find work in steel mills and industrial plants. So, people working at a car wash were primarily those who couldn’t qualify for a better job elsewhere or teenagers working for weekend party cash. The workplace issues I mentioned were take it or leave it.

In 2008, the California Carwash Campaign came about becauseof evidence that some car wash owners were taking advantage of employees, mainly immigrants. Industry leaders describe these owners as rogues. A rogue is someone who is unprincipled or deceitful.

Perhaps a better word for our rogue is stupid.

Arguably, unless someone simply has a penchant for mistreating people, cause for taking advantage of an employee would have to be financial gain.

• Making staff clock out before breaks

As shown above, rogue behavior is focused on reducing operating expense. Experience shows this can be accomplished with a variety of tactics.

Employers are required by federal law to maintain employee records (three years) and pay stub information (two years), including employee name and address, social security data, wage rate, dates and hours worked, deductions, etc. So, minimum wage and other requirements can be skirted simply by ignoring them and/or falsifying records.

As shown in the table, taking advantage of employees raises operating income by $102,810. Our rogue can take the profit or leverage lower cost per car to gain unfair advantage in pricing.

In examining benefit cost of taking advantage of employees, we find the U.S. Department of Labor uses a variety of remedies to enforce compliance.

Willful violators of minimum wage may be prosecuted criminally and fined up to $10,000. A second conviction may result in imprisonment. Employers who willfully or repeatedly violate minimum wage or overtime requirements are subject to penalties of up to $1,100 per violation.

Taking advantage of undocumented male workers has been the rogue’s path of least resistance to improving the bottom line. Evidence of this in the car wash industry is labor demographic and progression of labor reform.

In California, 37 percent of the population is Latino. Eighty percent of agricultural workers there are Mexican immigrant males; about 50 percent are citizens or legal residents of the United States; only 3 percent are non-Hispanic U.S. born workers. Arguably, car wash labor is similarly aligned.

Florida’s immigrant population (legal and illegal) grew 37 percent from 2000 to 2010 or by one million people. In 2010, immigrants accounted for 19 percent of Florida residents, the fourth largest share in the country. Immigrants now account for about 22 percent of all workers in the state.

Florida is becoming increasingly Hispanic, up from 16 percent of the population in 2000 to 22.5 percent in 2010 and projected to hit 26.5 percent by 2030. In fact, certain cities in Florida have seen the Hispanic population top the percentage of African-Americans.

Hispanic population in Pinellas County, FL surged 71 percent since 2000 despite a drop in the total county population. Some Pinellas cities have seen triple-digit percentage increases in theHispanic/Latino populations.

According to researchers at Florida State University, the most prevalent labor trafficking in Florida involves persons exploited for forced labor, and debt servitude is often the preferred means of coercion.

Observers say it is common practice for contractors to rent a house and use it to house as many as 10 to 20 seasonal workers, often requiring them to sleep on the floor or two to a bed.

Contractors will deduct money from workers’ paychecks and charge them for housing, cleaning, transportation, uniforms, visa fees, etc. Such deductions invariably cause hourly rate paid to the workers to drop far below federal minimum wage, at times resulting in workers receiving a net pay of zero. Workers who complain are often threatened with eviction or deportation.

To gauge where car washes might fit in, I went to www.wehirealiens.com, a site devoted to exposing “alleged” employers of illegal aliens. Here, a tally of Florida showed 24 percent of reports were leveled against restaurants, 29 percent landscaping, 33 percent construction, 12 percent hotels, and only 2 percent car washes.

Let’s examine some real world examples posted on the U.S. Immigration and Customs Enforcement (ICE) website, the largest investigative arm of the Department of Homeland Security.

A Plant City, FL man was sentenced to 27 months in federal prison for conspiring to transport 100 or more illegal aliens. According to documents, Herman Vazquez-Padilla, 32, conspired with proprietors of Pinellas County-based businesses to recruit and transport illegal aliens as employees for those businesses.

After a business owner requested new employees, Vazquez-Padilla would find prospective workers and bring them to the business. He charged the new workers recruitment and transportation fees. The case was investigated by Clearwater Area Human Trafficking Task Force, which includes ICE, FBI, and the Clearwater Police Department.

At the other end of the stratus, Robert Kramer, of Philadelphia, pleaded guilty to employing at least 50 illegal aliens, with constructive knowledge they were not authorized to work in the United States. Kramer was general counsel of Mace Security International and COO of Car Care Inc., a subsidiary of Mace.

Car Care hired undocumented workers, gave workers names of former employees, and paid them with checks in the names of the former employees. Kramer faced a maximum sentence of six months in prison and a fine of $150,000.

Minimum wage pays $15,000 a year or $3,000 below poverty level for a family of three. Rogues who pay below this end up costing us all in the long run.

A recent congressional study foundWal-Mart wages are so low many of its workers rely on food stamps and other government aid programs to fulfill their basic needs, a reality that cost all taxpayers.

Is there more that could be done by the car wash associations? I would say probably not. As comedian Ron White once said, you can’t fix stupid.