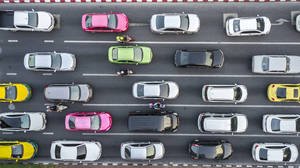 Capture rate is commonly used to develop an estimate of the average number of customers a car wash operator expects to attract each day from pass-by highway traffic. It is a ratio obtained by dividing sales volume and average daily traffic.

Capture rate can be calculated by manipulating historical data obtained from business surveys, traffic count studies, and industry reports. For example, if historical averages are 150 washes a day and daily traffic is 20,000 vehicles, the capture rate equals 0.0075.

Thus, if a developer assumed this rate and the site has traffic of 30,000 vehicles, the expectation would be to wash 225 cars a day.

Unfortunately, this doesn’t tell us a lot because the outcome assumes the same conditions exist for the new site with exception of traffic. For example, if the new site is located on a divided highway and the capture rate was derived from a group of stores located on undivided roads, then it would not be realistic to expect the same capture rate.

To overcome the inherent weakness of this approach, industry models were created to define trade area boundaries for site selection and to develop estimates of sales turnover.

These models assume the likely performance of a new store will be the average of a subset of stores having similar characteristics. The weakness of this approach is there must be a sufficient number of comparable sites in the group for the product class.

Another weakness is bias. The data used to build models are typically based on stores with better than average performance. After all, objective of modeling is to use existing store performance as prevision for a new store.

However, all similar stores do not perform the same. For example, experience has shown that unlimited wash program subscription rates for car washes with similar annual volumes can vary between 500 and 2,500 members a month.

Since unlimited wash customers visit an average of three times a month and represent as much as one third of annual sales volumes, variation in membership can skew outcomes significantly. Unfortunately, the models do not have a mechanism to account for this variable.

Similarly, the models do not have a mechanism to reflect the value created from being part of a digital car wash network.

Another approach to sales turnover is to express a market in terms of probability. This is based on the premise that customers have a choice to patronize a location in view of other alternatives.

For example, gravity models relate the share of customers that a store attracts as being inversely proportional to the distance they must travel and directly related to store dimension. Store dimension involves factors such as store size, service selection, price, curb appeal, brand image, etc.

In the gravity model, distance acts as a friction factor or impedance to visit a store whereas store attractiveness acts like a magnet (pull).

For example, what happens to an older in-bay automatic car wash at a gas site that has lost market appeal, contributing to declining wash volumes and dollar averages? If it gets a skin package and reloads, the site usually experiences a significant increase in sales and profits. The principal reason is the site is simply more attractive and appealing to customers as compared to its previous condition.

The most advanced approach to sales turnover is to develop a spatial interaction model. Interaction is a mathematical model that simulates the trip-making behavior of consumers.

The inherent weakness of this approach is complexity and that a lot of customized data is required. Consequently, modeling is time consuming and expensive. In the final analysis, there are many factors to consider in the development of sales turnover estimates for a car wash.

For example, in relatively low investment risk situations, a site-screening tool advised with simple operating rules may be appropriate. In some cases, value-added can come from using several approaches and then be reconciled into an indicated value. In other cases, it may be necessary to custom design a model and/or consider the value from a more subjective approach such as expert opinion.

According to Reilly’s Law, customers are willing to travel longer distances to larger retail centers given the higher attraction they present to customers. We know this to be true based on the results of consumer surveys.

For example, some years ago I worked with someone who built a new wash by a turnpike with very few rooftops nearby. Here, suitability of location was a function of being located next to the region’s major shopping destination.

After the wash was open for sometime, a customer satisfaction survey was taken. Not surprisingly, and to the owner’s delight, we learned that many customers traveled great distances. Some traveled 20 miles and more.

By comparison, industry surveys indicate 80 percent of car wash customers usually come from within a five-mile radius. In this case, customers’ willingness to travel further than normal and patronize the wash can be attributed to scarcity.

Here, customers had few shopping alternatives where they lived and the nearest competitor was not proximate to the shopping center. Of course, most washes do not compete in isolation. Industry surveys indicate that most operators compete against two or three other sites.

Consequently, there is a chance or probability that a customer will visit a particular car wash in view of other alternatives. This probability can be pondered beginning with the total available market.

Based on these assumptions, we would allocate 46 percent of the available market to the conveyor product class. How this pie gets divided up amongst competing washes can be characterized as a function of economic distance and store attractiveness. For example, the latest surveys indicate car wash customers tend to be location-loyal with 80 percent of professional users frequenting only one or two locations.

According to a consumer study conducted by Access Development Corporation, 80 percent of U.S. disposable income is spent within 20 miles of home. Access finds consumers typically don’t travel more than 20 miles for everyday purchases, and urbanites are predisposed to traveling less than 15 minutes.

So, having two or more competing washes within this range creates points of indifference where there is equal probability a customer would chose one wash or another.

For example, consumer surveys indicate that cost is a principal reason why customers don’t visit a car wash more frequently. Consequently, if the price were lowered, this would reduce economic distance and make a wash more attractive for certain customers.

The survey also suggests that professional car wash users don’t wash their vehicles all that frequently. Reportedly, 5 percent visit once a year, 20 percent twice a year, and 47 percent about four times a year. Only 28 percent visit more than twice a month.

Here, pundits suggest car wash customers can be motivated through ease of use, convenience, and enjoyment. Consider the latter where survey respondents indicated they would visit a wash more frequently if employees were friendlier.

Of course, this makes sense because although the car wash may be highly automated today it is still a people business that depends on personal relationships. Consider the mantra of the Splash Car Wash chain based out of Connecticut: Hard work and great attitude is the reason customers come back. According to Splash executives the company hires for smiles and trains for skill.