Towels, Part I – Find The One That Works Best For You 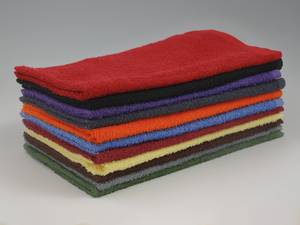 Proper towel selection for a car wash and/or detail center is instrumental in helping to produce a shiny, streak-free car. Towels are an important tool, and deciding which one to use can sometimes be confusing. Towel selection is usually a personal preference, so it is up to the car wash manager/owner to find a towel that works best for his/her operation. While there is technically no wrong or right answer (except for a towel that doesn’t work well), it is good to know all of your options.

For our purposes, towels are grouped in two main categories: cotton terry towels and microfiber towels. In Part I of this article we’ll confine our discussion to the former.

Cotton terry towels are still considered a standard in the car wash industry. Used predominantly as a body-drying towel, terry towels are extremely absorbent and have the “bulky feel” that many people like. Depending on the wash, some cars exit the bay still very wet while others just need a spot dry. A wash that has very damp cars may opt for a thicker towel than a wash that only needs to touch up a few spots. The key element to a good body towel is its absorption. For this reason, terry towels are still preferred by many car washes, due to their high cotton content and their bulk. Deciding which terry to use can be puzzling. Terry towels are available in a wide variety of colors, sizes, quality, and thickness.

White towels
are the quickest
to break in.

Some car washes choose colors to match their motif, but many choose more common car wash colors. Blue and white are by far the most popular colors sold to car washes, with red and green close behind. White towels are popular because they are the quickest to break in, and are more often readily available in many sizes and thickness.

The downside to white is that it shows the dirt more and can turn a dingy gray. Also, the lint of a white towel may be more visible on a car than lint from other colors.

Dark and medium colors are the most popular among car washes, particularly blue, green, and red. Dark colors hide dirt the best, and the lint of these towels tend to blend in with more vehicles’ colors, making lint less visible. (The lint will blow off the car before the customer will even notice). Lint has become less of a concern, especially with the introduction of lint free/low lint terry towels that are on the market now. Darker colors tend to take longer to break in because the fibers are saturated with dye. The fibers must be opened first so they can become more absorbent.

By far the most popular size for terry body towels is a hand-towel size (the same size towel you have in your house to dry your hands in the bathroom). These towels measure about 16” x 27” but can range from 15” x 25” up to 16” x 30”. This size is easy to work with, and will not get too heavy once saturated.

Smaller towels, such as 16” x 19” bar towels, are used when wiping down interiors, spot cleaning upholstery, and even cleaning the windows. These smaller towels usually have less bulk than their larger counterparts, making it easy to reach tight spaces. These towels are also less expensive and are used for areas of the car that are greasier/dirtier such as for cleaning wheel wells and doorjambs.

The thickness of towels is measured by its weight per dozen. Towels that measure approximately 16” x 27” typically range in weight between 2.5 pounds per dozen and over 4 pounds per dozen. Towels weighing in at 3 and 4 pounds are the most preferred. The benefit of using a lighter weight towel (3 pound) is that is has a faster break-in period. Lighter weight towels are also a bit more versatile, and could be used on the windows if needed. Lighter towels don’t become as heavy when they are wet. Another advantage of using a lighter weight towel is that they dry quicker, and more can be washed at one time. The down side is they becomes saturated quicker, and will need to be changed out more frequently. Slightly thicker towels (4 pound) will give a little more bulk to the towel, which many car wash operators prefer. These thicker towels also can absorb more water, but still aren’t super heavy when saturated.

In Part II of this article, in next month’s issue of Auto Laundry News, we turn our attention to microfiber and huck/surgical towels.

Valerie Sweeney is vice president of ERC Wiping Products Inc. located in Lynn, MA. You can visit the company on the web at www.ercwipe.com.