Size – Is Big In Your Future?

By contrast, the largest car wash project I’ve been involved with as an advisor occupies roughly three acres of land and cost nearly $14 million to develop. One portion of this property has a tunnel, detail facility, self-serve vacuum, and full-serve oil change. The other portion has gas sales, a convenience store, and a quick-service restaurant drive-through.

The overall design objective of a super site like Mr. Wash is the achievement of trade area dominance. The goals are to provide the most convenience and best image of any store in the trade area and value significant enough to make the store a consumer destination.

Convenience of location is a function of proximity to high-volume traffic and visibility and accessibility. Sites superiorto competing sites in terms of convenience will inevitably reallocate the demand inherent in a stream of traffic.

Primary attributes of location are demography and highway traffic. As shown above, Mr. Wash is strategically located in an area that can be described as a major shopping district.

Within five miles of the site are robust numbers of households and daytime businesses. Frontage and cross-streets carry high-volume, pass-by traffic and the district is fed by a high-volume, limited access highway.

Another attribute of super sites is multiplicity of services. In addition to the car wash, Mr. Wash has motor fuel, oil change service, interior cleaning, lounge, and a self-serve vacuum and detail area. An additional “polishing” area is planned. 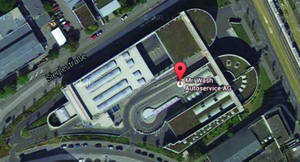 Getting to these services requires being seen and a layout that makes it easy for customers to get from entrance to fuel pumps to wash to detail to exit. As can be seen above, Mr. Wash accomplishes this with multiple access points, serpentine design, ramps, and two-story buildings.

Mr. Wash is an established brand name with branded products (i.e., MacOIL™). The chain has 33 stores strategically located in major cities throughout Germany.

Mr. Wash stores are pride-of-ownership facilities and customer service is considered both a value and principal characteristic of image. There is no uncut grass, tire marks on pump islands, dirty bathrooms, or un-cleared tables.

The company has also won service champion awards. For example, Mr. Wash provides interior cleaning in just eight minutes. This is accomplished with automation, use of moving platforms in wash and detail bays, and 40 employees on busy days.

A differentiating value is one where the retailer provides disproportionately high quality for the price charged. Mr. Wash achieves this by providing hand-finished qualities and charging prices ranging from $7.50 to $26.00 U.S.

The perceived value is high to consumers because Germans, like the British, love automobiles and most are prohibited from washing their own vehicles at home. Ostensibly, this may be the biggest stumbling block to a really big car wash in the United States. For example, the BBC has Top Gear during prime time TV in the UK and Duck Dynasty is popular here.

So, does the general public in the United States still love automobiles enough to support a car wash with the scale and scope of a Mr. Wash? Let’s test the sanity of this idea.

Building a new store does not create new demand. Wherever it’s located the super site will only succeed by capturing local demand. It does this like a big box store drawing from a larger market range and customers benefit at expense of smaller stores in the area.

Here, part of the proposed business concept is an express wash that can handle 360 cars an hour or 450,000 washes a year.

In other words, if the monthly mortgage payment were less than $93,750, the car wash component of the project would make financial sense. However, it takes more than a substantial car wash to make a super site.

Mirroring Mr. Wash, our site would also include oil change, detail facility, motor fuel (no convenience store) and, because Americans like to eat, a quick service restaurant drive-through.

Based on a one-story design, our site would require four acres of land and 25,000 square feet of buildings at a cost magnitude of roughly $19.0 million and an equity injection of $4.75 million.

This cost excludes entrepreneurial effort and due diligence expense during the three to four years it may take to plan, build, and launch the business.

Of course, location is crucial for success. For example, our super site would need density of at least 2,500 persons per square mile as well as traffic in the neighborhood of 45,000 vehicles a day along frontage roads and at least 12,500 on cross-streets.

Since car washes are widespread across major population areas in the United States, the proposed super site would be highly disruptive wherever it intervened. We would also expect resistance from local competition as well as NIMBY and environmentalists due to the scale and scope.

Consequently, the developers of such a project would need to find sufficient evidence the site is reasonably convenient and useful to the public because it meets the demand.

This would be demonstrated by a strong segment, a high propensity to combine shopping trips with fueling stops, and value customers would find advantageous enough to merit a trip to the store.