Auto detailing has always occupied a small space in the commercial car wash industry and it hasn’t gotten any larger over time. Check out the educational sessions at The Car Wash Show 2019 — detail was a no show. Aside from Prentice St. Clair’s presentation, the same can be said of the most recent NADA exposition. Most equipment manufacturers no longer carry detail supplies.

There are even fewer industry statistics available today on detailers with only two trade journals conducting annual operator surveys. And what data there is doesn’t paint a pretty picture.

As shown below, detail volumes at sites that combine detail with another profit centers have remained relatively stable. 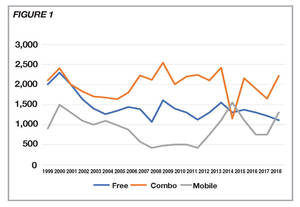 However, volumes at freestanding detail shops have dropped from around 2,000 in the late 1990s down to the 1,200 range, whereas mobile detailers were crushed during the economic downturn only recently returning to post-2000 levels.

Back around 2000, the International Carwash Association estimated the size of the detail industry at around 10,000 establishments. Arguably, there are far fewer operations in existence today.

Since the construction trend continues to converge on exterior-only washing, it is unlikely there will be a resurgence of detail shops or detailing services in the commercial car wash industry anytime soon.

Not only have detail shop volumes declined, so have revenues. According to the ICA’s estimates, average monthly revenue for detail shops in 2000 was about $17,000. Today, it’s about $13,000 (Auto Laundry News). Here, operating expenses are 65 percent of revenues. Over 70 percent of employees make an average wage of $12 per hour.

Although detailing may seem like it’s turning into something of a lost art as far as the commercial car wash industry is concerned, there is demand for it at car dealerships.

According to Mark Davis, automotive programs manager atSeminole State College in Sanford, FL, there may be an auto technician shortfall of more than 25,000 over the coming five years, including personnel needed to staff the recon department.

Consequently, new-car dealers watch their costs per unit very carefully, and this is where professional detailers can make a difference. For example, in 1970, I worked in the detail shop at a local

Buick dealership. The detail shop was responsible for taking care of the showroom, cleaning vehicles in the lot, pre-delivery inspection, undercoat and rust proofing, car washing, and reconditioning trade-ins.

Quite frankly, the process would often become chaotic and inefficient because it was easy to lose track of things without being connected to keep everyone fully informed of what was going on with every car at all times.

Today, however, there are cloud-based software programs specifically designed to help car dealers manage the recon process from the inspection phase through the sell phase.

And this is where a professional detailer can shine because the dealer’s net profit for used cars sold is almost twice as much as it is for new cars.

Consequently, detailers who understand the importance of the recon process and have the knowledge and skills to minimize cycle times have great added value for new-car dealers.

The recon process for used cars involves the decision to add a vehicle to the process followed by inspection, approvals of work, mechanical service, body shop, detail shop, photos, and selling. Generally speaking, it can take up to 10 days for this process to be completed at an average cost of about $1,000.

Moreover, it costs a dealership over $40 a day on average to hold a vehicle until it is ready for resale. Consequently, detailers who know how to use industry best practices to shave the cycle times for jobs can contribute greatly to a dealership’s profitability.

Conversely, detailers who want to remain vendors need to understand the consequences of not completing their jobs in a timely manner: they are holding up the next department in the dealership’s production line.

Detailers who want wholesale work will also need to acquire the software that enables car dealers to monitor their productivity as well as compare vendors’ performance.