Reclaim Or Restoration? – An Answer As Water And Sewer Rates Continue To Increase

Why are water and sewer rates increasing in most parts of the country? In some places it’s because there is a water shortage and they want to discourage excess water usage. Another reason is because tax revenues are down and the cities would rather replace those revenues than cut budgets. The cities have discovered a cash cow in the city water and sewer departments. In some parts of the country the water and sewer rates are increasing annually by double digits and are projected to continue that way for the next five years. If your wash is facing these cost increases, the best way to control the impact of these costs is by looking at water reclaim or water restoration systems. 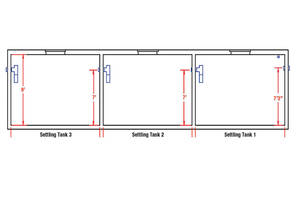 There are several factors to consider when selecting a water reclaim or restoration system.

The first place the wastewater goes after it leaves the wash bay or conveyor trench is the settling tanks, also commonly known as sand/oil interceptors. What are settling tanks for? City sewer departments want the wash to settle and collect the dirt washed off vehicles rather than the sewer department having to deal with the dirt. Many cities call these tanks sand/oil interceptors because they think that oil being washed off the vehicles will float and needs to be collected in these tanks rather than going to the sewer plant. The reality is that the alkaline detergent chemicals used in the wash emulsify (mix) the oil with the water. As a result, the oils will go wherever the water goes. It’s the same as washing an oily pan in your kitchen sink with dish-washing detergents. The oil mixes with the water and goes right down the drain along with the water.

If you are operating an existing site, are your settling tanks large enough to settle out the solids washed off vehicles or will they have to be increased in size? When considering sizing the settling tanks in preparation for a reclaim or restoration system, remember that dirt is what you are really interested in settling out. Gravity is free so the bigger the tank the better. The longer and deeper the settling tanks are, the more time the water and dirt will be in each chamber. Settling dirt out is a matter of time. The longer the water stays in each chamber the more dirt can settle out. The heaviest dirt will settle in the first chamber while much less dirt will be found in the second and third chambers. A sample of settling tank construction is shown below.

Maintenance of settling tanks is very important. As dirt settles on the bottom of each chamber it displaces tank capacity, which reduces settling time in each chamber, resulting in more dirt transferring to the next chamber. With a reclaim or restoration system, you do not want dirt to transfer to the last tank where the water treatment system is pulling water. If the treatment system pump has to deal mechanically with dirt, that dirt will prematurely wear out the pump and seals. Have the local vacuum-truck company come regularly to pump out your settling tanks.

What is the difference between a reclaim system and a water restoration system? Over the years, I have written articles that go into great detail to answer this question. Bottom line is that a reclaim system uses filtration of some form to remove solids and ozone or aeration to control odor. A reclaim system does not remove the used car wash chemicals from the water. With chemicals still present, this water has limited applications where it can successfully and effectively be re-used.

A water restoration system uses cyclonic separation to remove solids. Aeration is used to prevent odor and to activate aerobic bacteria to consume (remove) the car wash chemicals and hydrocarbons from the water. This water can be used in all applications in the wash except to make spot-free rinse water.

Ozone can be a very dangerous gas that is harmful to humans if it leaks into an equipment room. Two excerpts from EPA reports are found below:

“Scientific evidence shows that ozone can cause a number of harmful effects on the respiratory system, including difficulty breathing and inflammation of the airways. For people with lung diseases, such as asthma and COPD (chronic obstructive pulmonary disease), these effects can aggravate their diseases, leading to increased medication use, emergency room visits, and hospital admissions.”

“Evidence also indicates that long-term exposure to ozone is likely to be one of many causes of asthma development. In addition, studies show that ozone exposure is likely to cause premature death.”

Two EPA reports on the health hazards of using ozone can be found by visiting one of the two links below.

The non-hazardous alternative to ozone is aeration. Aeration is a natural means of controlling odor in wastewater and creating an environment where aerobic bacteria can consume chemical waste in the used wash water.

Another factor that’s important to investigate when looking at a reclaim or restoration system is the biodegradability of the car wash chemicals being used. Components that make up wash chemical products fall within three broad categories: they can be readily biodegradable, slow to biodegrade, or won’t biodegrade. Whether you are looking at buying a reclaim system or a restoration system, compatibility and biodegradability of the chemistry is very important. Chemistry that’s not compatible will appear in the wash cloth, walls, and the wash equipment as a black or gray slime. This slime will require an unacceptable level of maintenance.

The last thing that’s important to examine is the payback and long-term savings when a reclaim or restoration system is installed. First you need to find out what the city water and sewer costs are per measurable “unit” in your area. Cities measure a “unit” as either 750 gallons or 1,000 gallons which will be shown on the water and sewer bill.

To use an example for calculating payback, let’s say a wash uses 75 gallons per car. Of that amount, a reclaim system will allow you to reuse about 45 percent or 34 gallons. A restoration system will allow the wash to clean and restore for reuse 85 percent or 64 gallons. Assume the location washes 150,000 cars per year. The local city water charge is $5.50 per 1,000 gallons. The sewer rate is $5.95 per 1,000. The reclaim system with tanks, excavation, and installation will cost about $50,000 while a restoration system with tanks, excavation, and installation will cost $150,000. The payback will calculate as follows:

The important things to look at are not only the payback of the capital expense but also the long terms savings per year after the payback period. By quickly doing a payback calculation using your actual costs for water and sewer costs, you can determine whether a reclaim or restoration system makes sense at this time.

Tom Gibney is president of Aqua Bio Technologies. Formerly the vice president of the industrial division of Turtle Wax, he has over 25 years of experience in the vehicle wash industry. You can contact Tom at (877) 881-9141 or via e-mail at tgibney@aquabio.com. You can also visit the company on the web at www.aquabio.com.