Everybody now uses a computer, and everybody has computer problems. Raise your hand if this has ever happened to you: Your computer is not working the way you want, you call the technician and he comes out and looks at it and he says, “It’s a software problem.” You call tech support for the recalcitrant software and they say, “It’s a hardware problem.” There is a direct correlation to this dilemma in the vehicle washing business, between the equipment suppliers (hardware) and the chemical suppliers (software).

In vehicle washing, the end goal for the vehicle washer is to deliver a clean, shiny, dry car with good-looking shiny tires and clean wheels for his customer. To be successful at this, our vehicle washer must do this in a manner that is cost effective for both him and his customer. Our example vehicle washer, Vern, earned his money as an accountant, but always believed he should be in the car wash business, because it is so easy.

Vern has built his retirement dream wash, an express exterior — a 130-foot-long tunnel, over 145 feet of conveyor, with three pay gates. On a good Saturday, Vern and his crew of four will wash 1,000 to 1,200 cars. Vern has spared no expense on his wash equipment including a spot-free rinse and a quality water reclamation system. Vern is using high-end wash chemistry, with a cost per car of about $1.08 on his top package. This includes a silicone-based tire shine material and two high-end optional pay waxes.

Some of Vern’s customers’ cars end up not as clean, shiny, and dry with good-looking tires and clean wheels on those busy Saturdays. Vern is doing a larger percentage of rewashes then he would like. Mike, the maintenance guy, shows Vern the strainer basket from the reclaim system when he cleans it, and it is seriously packed up with goo, as can be seen in the example, below. Vern contacts his chemical rep, Salvador, Sal for short.

“Sal, what the heck,” Vern complains, “my cars are not getting clean; it looks like a film or a haze, and not all the soap is rinsing off. Also my reclaim strainer basket is gagging up with slime. Did you guys cheap out on the soap?

Sal gathers his forces, including his company’s chemist, and they make a trip out to look at Vern’s wash. They check to be sure there are no wash products being used that are not compatible with each other. They talk to Vern about his tunnel cleaning procedure and verify that there is not a high level of either acid or caustic being used to clean the tunnel. They check the pH of all the water sources, fresh, reclaim, and spot-free to make sure they are all in range. They check their chemistry titration rates; they verify that the right amounts of product are being applied. Sal issues his report to Vern: “All our products are right, we believe the film is a result of the reclaim water, and the soap hanging on is due to a lack of rinsing. It’s a hardware problem.”

Vern’s next call is to Ernie his equipment guy. “Ernie, what the heck, your gear is not cleaning the cars, I’m getting some kind of film, and I’m not rinsing off all the soap.” Ernie calls and talks to his wash equipment supplier; they tweak the spot-free arch nozzles after which they do a much better job of getting the residual soap off. Ernie also talks to his water treatment guy. Wally, the water treatment guy, asks for the SDS sheets of the chemistry being used. Ernie put him in touch with Sal the soap guy, who gets him the SDS sheets. Wally directs Ernie to verify the location of the tire-shine dam, which was installed to keep the tire-shine material that drips off the tires going directly to the oil water separator, and not into the reclaim tanks. A diagram of an example tire-shine dam is shown above. This dam could also have been installed too far away from the tire shiner and could also take too much of the fresh water putting on rinse products and spot-free rinse, which you want in your reclaim tanks to help dilute the solids-laden wash water.

Ernie reports back to Wally: “The dam was correctly placed, the drain on the tire-shine side had not at any time been plugged which would have allowed the tire-shine side to overflow the dam back into the reclaim.” Also Ernie reports, “When Vern’s guys clean the trench floor on the reclaim side of the dam they scoop the solids and rinse toward the drain, on the tire-shine side. They do not scrape up the excess silicone based tire shine and put it over the dam and rinse.” Ernie had seen, and Wally had heard of, this happening at other sites. Ernie did discover that the overflow from the reclaim tanks did flow through the oil water separator, and at some point the oil water separator became blocked and allowed the tire-shine water to back flow into the reclaim tanks. Vern had to contact his plumber to correct the blockage, and he had his reclaim tanks pumped. A typical reclaim tank setup is shown above.

Not having the residual tire shine in the reclaim water knocked down the film and haze on the vehicles and lessened the reclaim basket gagging. Wally, the water guy, had studied the SDS sheets, and while some of them were less than helpful as to the products used, he did not find anything that would create a problem. Wally was looking for, but did not find, too much surfactants and mineral seal oils that can create long-chain polymers and could have caused the hazing and reclaim basket gagging.

In this fictitious example, the problem was a hardware issue — a problem with the underground storage tanking system. All the things Sal the soap guy and Ernie the equipment guy looked for, including the examples of what could have been wrong, I, err, Wally the water guy had seen or heard of.

There could have been chemical incompatibilities, using products that raised the pH above 9 or lowered it below 5, for example. Or products that shouldn’t be used together could have been used together. For example, chlorine bleach and ammonia are separately good cleaning agents. Mixed together they give off a dangerous gas, chloramine, which could be deadly. It is unlikely that there would be wash chemistry so incompatible as to be that dangerous, but it is possible to create the long-chain polymers that could plug up filters and nozzles and create a hazing effect on the vehicles. 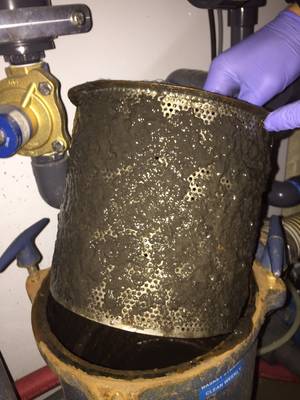 All of the potential plumbing examples cited have actually occurred, along with many other issues that I couldn’t fit in the story. If you have an issue similar to Vern’s, contact the people who provide your chemistry and equipment and talk to them, they are there to help you.

Not surprisingly, I identify with the hardware guys, Ernie and Wally, in this story, while some of the best people I know are in the car wash chemical business. The story of Vern’s wash troubles shows that it takes a collaborative effort to get to the bottom of an issue. It is too easy to hold a meeting and assign blame. Like nearly everything in life, it is not ever just one thing or one person — there are myriad combinations to look for.

Charles Borchard is the general manager for New Wave Industries, the manufacturer of PurClean Spot-free Rinse Systems and PurWater Water Recovery Systems and is in his 29th year in the water treatment business. He can be reached via e-mail if you have questions about this article: cborchard@purclean.com.