The September 2016 issue of Auto Laundry News carried an article on metered vacuums. The author asserted that many operators (i.e., of express exterior locations) were growing tired of giving away vacuum service for free, and were looking for ways to turn this around without alienating customers.

The suggested solution was to regulate vacuum use by limiting free time on the machine. After a predetermined period, the vacuum would shut off, and customers would have the option to buy more time.

Why the push back?

Supposedly, free vacuums have changed consumer behavior and customers are vacuuming longer than they used to. The result has been marathon vacuum sessions, long waits, and rising costs associated with energy, equipment maintenance, and obsolescence.

Arguably, metering vacuum use is similar to “downsizing” consumer products such as ice cream. Historically, ice cream was sold in standard .5-gallon containers. However, in 2008, Breyers and Turkey Hill Dairy downsized their containers to 1.5 quarts. Subsequently, other producers followed suit with the exception of holdout Blue Bunny, who reduced its standard container size to 1.5 quarts only last year.

According to Quintin Frey, president of Turkey Hill Dairy, the decision to downsize was due to rising costs of ingredients such as milk, cream, cocoa, and sweeteners as well as packaging, fuel, and labor.

Frey’s decision was based on the results from focus groups that indicated keeping the price the same and decreasing size of the package was the best answer, even if no one was happy about it.

Since downsizing is essentially an increase in price — less product for the same price — how did consumers react? According to USDA National Agricultural Statistics Service, between 2005 and 2014 per capita consumption of ice cream dropped from 25.2 to 22.8 pounds and production dropped by 87.8 million gallons.

According to some sources, about 40 million gallons of this decline is attributed to reducing the standard container size. As an ice cream lover, downsizing left me with a sour taste. My reaction was to switch brands and purchase ice cream from companies selling in .5-gallon containers.

However, this strategy eventually failed because no one packages ice cream in .5-gallon containers anymore. As a result, I eat a lot less ice cream today because my wife will only get it when it’s buy one, get one free.

What about the potential push back if vacuums are metered?

Consider a customer who normally spends 10 minutes vacuuming the seats, carpets, mats, and trunk compartment. If metered time were five minutes, this customer would need to purchase five more minutes to obtain the same level of service.

If the price for five minutes is $1 and the price of a car wash is $5, this customer would experience a 20 percent increase in the price to clean their vehicle. Otherwise, they would need to decrease the amount of time spent vacuuming by one-half.

Metered vacuums would probably affect most economical shoppers who are more concerned about price and less concerned about quality. This might include former self-serve users who defected for the promise of a low-price express wash done in three to four minutes and a free vacuum.

Affected least would be discriminating shoppers who are more concerned with quality and less concerned about price. This would include customers who use express as an in-between to full-service. Arguably, metering would provide diminishing returns across the spectrum.

Pundits argue metering would help create a sense of urgency encouraging customers to move more quickly through the vacuum process. Sounds great, but customers aren’t employees who would follow along because keeping their jobs would depend on it. 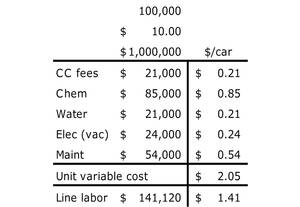 Moreover, there is also the added expense to consider from retrofitting the vacuum system.

So, is metering the answer?

Let’s consider the prototypical exterior express with 120’ conveyor and 24 vacuum spaces. The tunnel is state-of-the-art, and the conveyor has every conceivable online profit center as well as contemporary marketing (i.e., unlimited wash, VIP, mobile app, etc.).

Shown right are data for our super-efficient wash. If metered vacuums would reduce usage by 50 percent, the savings in electric cost would be $12,000 or $0.12 per car. Arguably, $12,000 isn’t peanuts, but many operators are facing challenges that are far more significant.

After all, our car wash is super efficient and has nothing else to sell. Thus, its future profitability may be affected by rising water rates, increase in minimum wage, as well as increases in electric rates and chemical cost.

For example, the table below shows what happens if hourly wages increase from $12 to $15 and water and sewer rates rise from $3 to $9 per 1,000 gallons of fresh water. 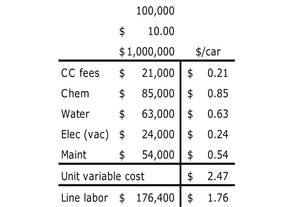 So, $12,000 savings from metering vacuums would only make a dent in this at the risk of alienating customers. Alternatively, a price increase that would cause average revenue to rise from $10 to $10.77 would offset the increase in operating expense.

So, the car wash operator’s dilemma is similar to that of the ice cream producers. Use cheaper, lower quality ingredients; keep size the same and raise price; or reduce size.

Ice cream producers chose to reduce size and they eventually paid a price for that decision in the form of alienated customers and reduced sales volumes.

Focusing on cost and keeping price the same didn’t work for self-serve. So, keeping things the same (i.e., unlimited free vacuum) and increasing price a bit might not be such a bad alternative.