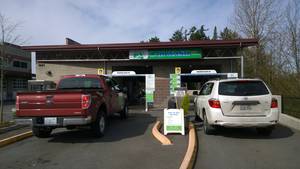 After just a few years of operation Craig MacKay did the unthinkable. He ripped outhis five-year-old in-bay automatics and replaced them with updated models. The idea of trading out wash equipment that was just approaching middle age would puzzle most operators but hearing MacKay tell it he had little choice.

“I couldn’t keep the machines running with any regularity and couldn’t get parts,” MacKay says of his unorthodox decision to replace his two in-bay machines. “My repair costs were pushing over $1 a wash, and the machines weren’t getting any younger. I was at the mercy of the repair/maintenance people. There were times I waited six weeks just to get a part. I bit the bullet, as painful as it was, I just couldn’t do it anymore.”

The decision to upgrade the wash equipment at Clean Planet Car Wash in Woodinville, WA wasn’t an easy one, but one that MacKay has fully embraced, especially after putting his new Mark VII ChoiceWash hybrid units through their paces. The new units are less water hungry, require less energy, are quicker, and most importantly, reliable.

The wash sports a host of environmentally friendly initiatives that makes it deserving of the Clean Planet name. It utilizes reclaim water, captures reject water from the RO system and uses it as the first source of water in its chemical injection, and utilizes eco-friendly chemicals. The wash positions itself as the green car wash option driving home the eco-benefits of professional versus driveway washing.

Prior to developing and opening the wash five years ago MacKay was in the building materials business. Having worked at and eventually owning Woodinville Lumber he was accustomed to running a large operation with a huge staff. With over 60 employees and annual revenue north of $100 million the lumber business was certainly thriving. MacKay sold the business in 2003 and stayed on as president until the new owners eventually closed the doors amid the housing crisis.

MacKay had his eye on the car wash business for over 15 years but it wasn’t until the closure of Woodinville Lumber that the entrepreneur was able to embark on his second career. Woodinville had just one self-serve location and a run-down gas-station site and was in need of a quality, automated car wash.

“The car wash industry was something I had been interested in for quite some time,” MacKay says. “I was looking for the right opportunity location wise and price wise. I was pretty specific, I wanted it to be in Woodinville and I wanted the wash to be located close to my home.”

After a couple years of research MacKay finally found the future home of Clean Planet, but there was just one problem: the perfect location was on a much-too-large, undividable site. He was faced with the decision of turning his back on what he believed was the ideal spot for his wash or finding a use for all of the extra land that came with it, he chose he latter.

MacKay decided to build a small commercial center with four buildings and become a landlord. All of the units are currently leased and the tenants include an automotive repair shop, a restaurant, the car wash, and a group of breweries, distilleries, and wineries.

Woodinville is known as the Napa of the North. With over 117 wineries and tasting rooms within the city limits the community is certainly deserving of the moniker. After initially positioning his small commercial center for all things automotive, Mackay has transformed his property to accommodate the growing number of craft brewers and wineries in the area.

In addition to the car wash and the assorted leased locations on site, the property is home to one other important addition: Clean Planet Auto Detailing. MacKay’s customers were consistently asking for a recommendation for a good local full-service detailer. After a search for a detailer lessee proved to be unfruitful, MacKay decided to fill the need himself and opened up Clean Planet’s sister business.

“We specialize in exteriors,” MacKay says of the 2,000-square foot detail shop. “We provide multi-step paint correction, scratch removal, and high-end coatings. It is not uncommon for us to do a $1,200 to $1,400 detail.”

Helping to drive detail revenue is Clean Planet’s Gtechniq interior and exterior coatings. The detail center is a master accredited dealer and applier of the high-end coatings that can fetch as much as $500 per application. The products are the same that new-car dealership often charge twice as much to apply.

“The dealerships are more about selling the warrantees than applying the products correctly,” MacKay says. “We can sell the same warrantee and put on the same product but we put it on right for half the price.”

MacKay and one full-time detailer, Gabriel Foster, handle the detailing duties. The car wash is open 24/7 and is staffed with one attendant during daylight hours. Foster doubles as a car wash employee and maintenance worker. In addition, Clean Planet has four part-time workers staffed primarily from the local high school.

MacKay relies on the high school’s Future Business Leaders of America program to staff his part-time needs. He has a nice relationship with the club’s instructor and leans on the relationship when he is in need of a new worker to fill his ranks.

In addition to relying on his satisfied customers to spread the word about their positive experience at Clean Planet, MacKay authors a monthly column on car care in a local magazine and publishes a monthly newsletter.

MacKay is a doer, willing to adapt his plans to get things accomplished. When his ideal location turned out to be too big for just a car wash, he became a landlord. When his wash’s services expanded to include detailing, he rolled up his sleeves and manned a buffer. When his in-bay automatics were proving unreliable, resulting in lost revenue, he replaced them. MacKay’s can-do attitude has made his commercial center a destination and both his car wash and detail center a success.