The information presented in this profile results from an analysis of data provided in Auto Laundry News annual operator surveys (1997-2017) and several other sources including the International Carwash Association. 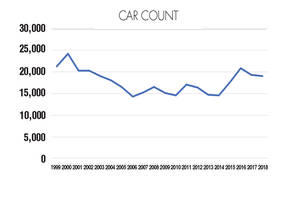 As shown in Figure 1, in-bay automatic sales volumes have trended along with the economy. Average for the period was daily traffic count of 22,700 and 19,000 cars washed annually. 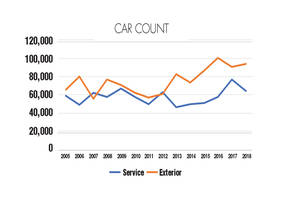 As shown in Figure 2, conveyor sales volumes have trended along with the economy albeit at less of a severe pace than self-service or in-bay automatics.

Full-service and flex-serve have average daily traffic count of 36,000 vehicles and wash an average of 60,000 and 70,000 cars, respectively.

The data also illustrates how exterior-only has grown in recent years with operators reporting an average of 30,000 more cars washed per year as compared to full-service or flex-serve car washes. 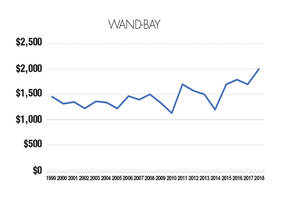 As shown in Figure 3, wand-bay sales revenues have also improved in recent years.

Table 2 shows the expense ratio for each product class as a percentage of total wash revenues (excludes rents and debt service). Past reference is given because the data for each class had different beginning dates.

In 1992, 60 percent of conveyor operators owned a single site; currently it is 50 percent.

With the exception of rural areas, it is uncommon to find a situation where a car wash operator is not competing against two or three other locations.

In 1998, this was the case for 38 percent of self-service and in-bay automatic operators. Today, this has notched up a bit to 41 percent.

According to preliminary results from the “Professional

Carwash Industry Report,” 24 percent of survey respondents plan to launch or purchase another car wash within the next year.

As shown in Table 3, car wash operators have adopted technology such as Internet websites and e-commerce at different rates.

According to a study by B2B research firm Clutch, less than two-thirds (64 percent) of small businesses have a website.

Among small businesses without a website, 58 percent planned to build one in 2018. Small businesses cite cost (26 percent), irrelevance to industry (27 percent), and social media (21 percent) as key reasons behind their decision not to have a website.

By 2019, 94 percent of small business websites will be mobile friendly, up from 81 percent in 2017. The latter point is important because digital car wash networks (e.g., Superoperator, Easy Wash) are beginning to form.

Consequently, operators without digital and mobile marketing capabilities will be at a disadvantage in terms of finding new customers.

For example, less than 20 percent of self-service and in-bay operators reported they accept numeric code or barcode payment and only 2 percent reported mobile-device payment acceptance.