Historically, the car wash industry has been an equipment-driven business, but its future will most likely be determined by people.

Consider the population cohorts that currently make up the universe of potential car wash users: Baby Boomers, Gen-X, and Millennials.

According to economists, about 75 million Boomers have benefited from relative prosperity following the high growth and economically stable decades after World War II.

Now into late middle age and retirement age, Boomers will inevitably produce less and spend less, which is expected to have widespread effects on the economy.

For example, 10 years ago, my wife and I both worked full-time and had two cars, a motorcycle, house, savings and investments, and good health. Today, we collect checks, ditched one car and the motorcycle (back surgery), and downsized to a condo.

Although anecdotal, this illustrates how Boomers’ potential lifetime value to car wash operators may decline steadily. 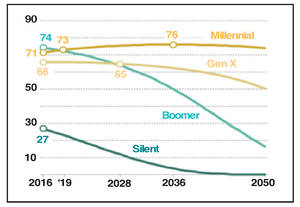 Shown above is the projected population by generation (Source, Pew Research Center).

The Census Bureau projects that Gen X population peaked at 65.8 million in 2018 and is projected to overtake Boomers in 2028. Sounds about right, as that would make me 77 years old.

Gen-X makes less, spends less, and owns less than the Boomers they are slowly replacing. However, Gen-X is more entrepreneurial, accounting for more than 50 percent of all new business start-ups.

Gen-X population is expected to decline in 2028 albeit at a lower rate than Boomers did. However, this generation faces uncertainties: social security entitlements, interest rates, taxes, etc.

In terms of car washing, Gen-X has taken to express, as Boomers once took to full-service. Consequently, we could argue that the car wash industry should remain relatively stable until at least 2028.

The next big thing will be Millennials who are projected to overtake Boomers in population this year as their numbers swell to 73 million and Boomers decline to 72 million.

According to my daughter, Millennials already consider Boomers ancient. By 2028, they will start to consider Gen-X ancient.

However, as the next largest generation, it’s hard to imagine Millennials embracing car washing with the same gusto as Boomers did when wash and wax was almost a ritual for decades.

For example, brand loyalty ruled when my generation and parents bought new cars whereas Gen-X ushered in an era of no-haggle price and buying online. Today, Millennials think it’s cool to use an app to buy a car and pick it up at a vending machine or have it delivered on a flatbed truck.

Millennials reportedly drive less than previous generations, they spend less on cars, and they share them more often. Millennials have also been stereotyped as lazy, rude, and less fastidious about cleanliness.

According to an article in Inc.com, Millennials rank the top three problems we face now as climate change (destruction of nature), conflict (i.e. war), and income inequality.

Arguably, people may present the greatest challenge to the car wash industry in the future.