Belt Conveyors – Coming Of Age With Advancements That Matter

Twenty-two years ago, the car wash industry began a journey based on a fledgling development idea of Mike Mountz, who became the 2010 Car Wash Hall of Fame inductee several years later. Mike had observed an airport people mover in operation and it crossed his mind that what he was watching could be a real boost in productivity if it could be adapted to transporting his team alongside the vehicles they were processing in the finishing and detailing operations of his business. Over the next few years, that initial concept went through a few iterations to become the people mover detail belt in today’s expanding express detail operations. 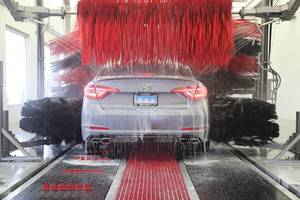 While the adaptation of the belt conveyor to detailing was new, the basic technology was not. Plastic chain conveyors were commercialized in the 1950s as the engineering plastics industry developed. Before the car wash industry “discovered” plastic chain conveyors, the concept was commonplace in automotive assembly plants. The fundamental design and application parameters were already known and were transferred from car assembly to car detailing.

In the next several years, after the detail belt was introduced, there was experimentation and development in the wet side of car washing. Even that idea wasn’t without precedent. A car wash belt conveyor was built in Chicago a century ago, in the twenties, with a wooden belt. The idea did not catch on, and the concept went into hibernation. As the concept was resurrected with plastic chain in the first years of the 21st century, what quickly became evident was that car washing could not adopt a direct application of car-assembly-plant technology. The chemical environment, the operational environment, and the consumer environment were different from the industrial and detail applications. Things that component vendorsrecommended did not work — or at least were not durable — and nobody had the answers or experience. The first dual belt conveyors forwash operations started up in 2004 and 2006. At that time, the belt was good for about a quarter million washes. The customer-experience advantages were already very evident, but the longevity and investment economics were questionable.

Today, there are lots of numbers driven by the development efforts of the last two decades:
• The number of car wash belt conveyors installed around the world is approaching 800.
• The record for monthly wash volume on a single belt is 63,472. 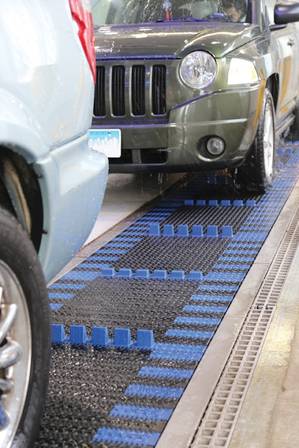 • The wash record for a single belt in a single day is 3,255 washes.
• The longevity record for the plastic chain before replacement is currently 1.2 million washes. Service life has improved to where 800,000 washes are routine, and some washes with precise maintenance programs and operating procedures are exceeding a million washes.
• Several other Car Wash Hall of Fame inductees have converted to belt conveyors based on customer experience and preference, as well as the economics. They calculate, measure, and report numbers like two-year investment payback, 13 percent ROI, 20 percent productivity improvement, and 15-year service life of the entire installation.

So, what changed? Well, obviously, the numbers above have changed. But what drove those numbers? Development; experience — customer experience, operator experience, and manufacturer experience — adaptation; design; data; observation; trial and error; failure; and success. All of that takes time and investment. What has come out of it is a body of knowledge — car wash knowledge — that only washing cars can give you. These are all elements of advancements that matter.

Over the past decade, the concept had to be executed and proven. As with any change that upsets the status quo, there have been lots of opinions, and all short of facts and data to support them. Facts and data on any new idea, any new theory only come with action and experience. There have been lots of opinions erroneously stated as fact. At first, the popular claim of antagonists was that unlike a chain and roller conveyor, the car wasn’t always in the same spot side-to-side on a belt, so the brushes couldn’t clean the car. But when was the passenger side of the car ever in the same place? It didn’t even make sense, but the nay-sayers had to come up with something. Then there was the claim that without rolling wheels, you couldn’t use a tire brush and it left the tires dirty. But when was the last time you had a serious customer complaint that their black rubber tires weren’t quite clean? Customers today don’t even care about their tires; they want their wheels clean, which are better cleaned by high chemistry and high pressure than a tire brush anyway. To people experienced in car washing, you can see that those claims don’t matter.

There have been several attempts to enter the car wash belt conveyor business with unsubstantiated claims of advancements that are presented with showmanship and a good story. But without real world data and proof in the field, the “advancements” don’t matter. For example, the conveyor suspended on isolated individual galvanized cross beams anchored to the concrete walls of the pit 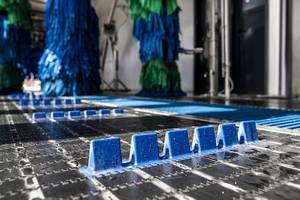 sounded like a good idea, until the day that the conveyor collapsed under the weight of a limo and dropped it into the pit. There is a reason that galvanized steel is not the material of choice of any of the leading car wash equipment manufacturers. Car washers know the environment. “Those who cannot remember the past are condemned to repeat it.” – George Santayana.

Linear projections of data where the mathematical relationships are not linear and where proven engineering principles are ignored are not advancements, nor do they matter. Promising car wash belt conveyor life to a million washes based on car transport on a dry belt in a controlled environment is not just immature at best, but incompetent and deceptive. It’s not an advancement, nor does the claim matter — except to the real car wash operator who only realized 200,000 washes before the belt wore out, after paying for a belt he expected to deliver one million washes.

There is an enticing claim that cutting holes in the glide surface beneath the plastic chain gets more dirt out and makes the belt last longer. But there are several issues with the validity of that claim. It is common sense that if you cut a huge portion out of a glide plate, what’s left may not last as long. If the design feature removes more dirt and dirt is an issue, where is the accumulation of all that dirt in the pit? Furthermore, in only 5 percent of belt conveyors is erosion the limiting factor in plastic chain life. Most importantly, there is no data to back up the claim that the feature reduces the plate wear of the remaining glide plate. This “advancement” when compared to existing features does not matter — there is no supporting experience or data.

Several years ago, when the expected life of a plastic chain was a half million washes and a potential customer was told that the next developmental target was 750,000 — the point where the lifetime cost/wash of a belt and a chain-and-roller conveyor were a “wash” (pun intended) — the customer reported that their chain lasted 800,000 washes.

In 2020, they installed their first belt conveyor.

The real industry-leading car counts, durability, and investment returns continue to advance — measurable advancements that matter. When weighing your options when contemplating a car wash belt conveyor or any other equipment change, validate the claims and vet the person making them. Demand real numbers. Check them out. Belt conveyors have advanced and come of age. But pursue advancements that matter and do your due diligence to obtain the economics that matter — to your bottom line.

Bob Schaefer handles distributor sales and tech support for AVW Equipment Co. Inc. and is also involved in commercial development. With a background spanning engineering and equipment distribution, he is keenly aware of the effects of equipment performance on customer experience and retention. You can visit the company on the web at www.avwequipment.com.