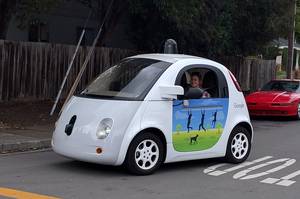 An autonomous car is a vehicle that is capable of sensing its environment and navigating without human input. For example, in the classic Arnold Schwarzenegger film “Total Recall” there were taxis called Johnny Cabs controlled by artificial intelligence in the car or the android occupants.

Perhaps the closest thing to an auto-nomous car today is Google’s in-house “driverless” car shown above.

Many policy analysts view driverless, self-driving, or robotic cars as a potentially disruptive innovation. For example, the Bureau of Labor Statistics estimates there were 233,700 taxis drivers in the United States in 2014 with a median pay of about $23,500. According to the American Truck Driving Association, there are 3.5 million professional truck drivers in the United States. The median annual salary for all truck drivers is $40,000.

So, if autonomous vehicles become a reality in the future, we could be saying bye-bye to potentially millions of jobs and hundreds of billions in personal income.

Of more immediate concern is Mr. Car Wash Manager who has to act when a “self-braking” vehicle applies the brakes when it is not supposed to, such as when it is proceeding through the wash tunnel.

The problem is: How do operators ensure that all vehicles, including those equipped with autonomous technology like anti-collision sensors, are safe from wash-tunnel entrance to exit?

Common to all automated systems are sensors and a power supply to activate devices. So, one obvious method to exploit a self-braking system might be as simple as temporarily interrupting its power supply. No power, no self-braking, no chance of collision in the tunnel.

Of course, zero collisions at the car wash will never be a certainty as long as there is the possibility of the conveyor chain breaking or a customer accidentally turning the steering wheel or stepping on the brake pedal instead of the gas pedal and vise versa.

So, what aids the car wash operator in achieving the goal of providing a safe, no-collision wash from entrance to exit? We can argue it is the human driver because of the expectation they will respond and intervene when needed. We can also argue it is the technology because the wheels of a vehicle do not rotate on a belt conveyor as they do on a chain conveyor.

So, potential solutions might involve new standard operating procedures, educating customers, and/or installing a belt conveyor. It has also been suggested this issue be resolved by the International Carwash Association re-engaging with the automakers.

The American Automobile Association finds 75 percent of drivers would be afraid to ride in a self-driving car. Forty percent said they are either undecided or reluctant to purchase semi-autonomous features on their next vehicle, while 84 percent said they trust their own driving skills more than the technology. Also, many people felt the technology is too new and unproven. Added cost is a concern, as is the annoyance with technology interfering with the thrill of driving.

Experts say the public’s reservations aren’t all that surprising considering many people have little experience or understanding of the autonomous technology involved. I’m not so sure about this.

For example, my car is equipped with electronic stability control (ESC), traction control, electronic brake force distribution, and brakes assist. On a recent trip up north, I must have hit enough potholes to cause one of the sensors to fail.

Since all of the safety devices are interrelated, the failed sensor caused the cruse control to disengage and the throttle to change incessantly because the ESC wrongly interpreted tires as slipping on wet pavement. The sensor was an $18 part. How many sensors are there in an autonomous car?