The International Carwash Association’s premier annual event, The Car Wash Show, took place May 9-11 at the Music City Center in Nashville, TN. While final figures were not yet available at press time, show organizers were confident enough to describe the turnout in terms of “record numbers.”

A pre-show program on Sunday, May 8 offered a management fundamentals course and a new investor event titled “Meet the Market.” Educational sessions for attendees at large commenced at 8:00 a.m. the following day. Programming was much simplified this year. There was only one track. One pass gave you access to everything excepting the pre-show events on Sunday.

Kudos to whomever devised the “headliners” concept, the first session of the day featuring samples of the presentations, formerly known as premium, to follow. This not only enabled attendees to make informed decisions as to which seminars to attend, but also gave them some brief insights into those sessions they chose not to sit in on. No such previews were necessary for the Pitch-60 sessions presented by industry vendors or operators. For an audience of car washers choosing a topic from subject matter they are well acquainted with did not present much of a challenge.

The ICA’s U.S. Consumer Research Study always generates interest upon release. Bob Klein, ICA’s research director, presented some key findings from the latest study. Broadly, the study found it to have been a remarkable year for the car wash industry, with more consumers than ever most often washing their cars at professional car washes and more customers signing up for membership in unlimited wash clubs. Members love the wash they use most often. The study found that 72 percent rated their wash at the highest possible level.

During the General Session on Wednesday the International Carwash Association bestowed its highest honor — induction into the Car Wash Hall of Fame — upon Bill Dahm, CEO of Crew Carwash. Crew had its beginnings in 1948 with the opening of the first Mike’s Minit Man Car Wash in Fort Wayne, IN by Bill’s father, Joe, and uncle, Ed. A second location followed in 1971. In 1978 the company changed its name to Mike’s Express Carwash. In 2014, with Bill and his brother, Mike, running the show since 1993, the company then 41 locations strong, amicably split in two. Mike retained the Mike’s Express name and Bill reorganized his locations under the Crew brand.

The positive vibe at the show extended from the Consumer Research Study to the show floor. In an interview conducted among the exhibits, Jeff Pavone and Bill Martin, partners in Amplify Car Wash Advisors, marveled at how the industry is doing. “Since the beginning of the year, we have never seen this much activity,” said Pavone. Martin added, “Thirty-five years ago, there were maybe two serious buyers in the industry. Today we represent 25 buyers.”

Mark Tentis, vice president global sales for OPW Vehicle Wash Solutions may have captured everybody’s enthusiasm: “The car wash industry is booming. We can’t keep product in stock. Orders are great. Everybody is making a lot of money.” 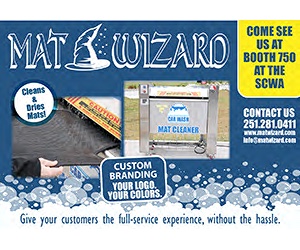