Several months ago, I had a long discussion with a car wash operator in New York facing increased operating expenses due to a significant increase in the minimum wage.

Like many restaurateurs and other small business owners in New York, he is contemplating cutting hours, cutting staff, raising prices, and nixing costs wherever he can. 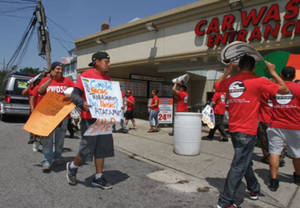 In this case, the effect of several years of minimum-wage increases cost one store in his company about $100,000 in profit this year alone. To compound matters, this is a smaller site where there isn’t much difference between average crew size and maximum.

Arguably, this is one possible outcome of the Fight for $15 movement. This movement’s mantra is it’s time to pay people enough to survive and what they deserve, and union rights.

Let’s start with paying people enough to survive since this is the basic premise of the movement. One way to obtain an opinion of living wage is the Living Wage Calculator created in 2004 by Dr. Amy K. Glasmeier at MIT (updated 2018). Glasmeier suggests the living wage is better defined as a minimum subsistence wage for persons living in the United States.

To summarize, living wage is a step up from poverty. It does not include funds for pre-prepared meals, restaurants, entertainment, vacations, savings, or investment such as buying a house. It’s just enough to avoid suffering consistent and severe housing and food insecurity or public assistance.

The living wage calculator provides the hourly rate individuals must earn to support their family, if they are the sole provider and are working full time (2,080 hours per year).

However, even if the $15 movement succeeds, it would only lift workers up to poverty (survive) level not a living wage. Arguably, union rights are intended to help the movement accomplish that goal.

For example, in Germany, some unions have negotiated contracts where employees are paid full wages but only log in 28 hours a week to achieve a better work-life balance whereas fast-food workers here are fighting for $15 an hour.

AT THE CAR WASH

It doesn’t take much imagination to envision what would happen if a car wash operator would have to pay entry-level workers $23 an hour. For example, an express wash might see its line labor cost rise from $150,000 to $287,000 plus an increase in management salaries to keep things equitable.

Moreover, there would also be a trickle down effect in higher prices for chemical, equipment, support, and utilities, as these businesses will have to pay higher labor rates.

The combined effect might require raising the price of a car wash service by $5 or more justto keep things on an even keel. Arguably, this price increase might not be sustainable especially in an economic downturn.

As for what workers deserve, this can be spelled out by doing the math. For example, an express wash with sales of $1 million might have labor costs (fully burdened) of about $250,000 or 25 percent of sales revenue.

Here, the manager might have total compensation of $65,000 while attendants receive an average hourly wage of $12. So, the car wash manager is pulling down a living wage, but the staff is impoverished as defined by the living wage model.

One possible solution to the car wash industry’s low wages issue may come from what has happened in the U.S. steel industry. Back in the 1970s I worked at a steel mill that made tubular products for the natural gas and oil industries. The plant was unionized and employed 1,200 full-time workers. However, the degree of division of labor was incredible. Here, each production and maintenance person was only allowed to do one job.

Today, there are micro mini-mills producing the same amount of product from recycled materials with only 300 employees. This efficiency is achieved through automation, multi-tasking, cross-training, and profit-sharing.

Most express washes also have two attendants on duty who are responsible for mostly directing vehicles onto the conveyor and policing the vacuum area and mechanical room.

Furthermore, some sites may have the attendants manually prep vehicles and/or station attendants at the exit end to towel dry vehicles.

So, you have a manager with major responsibilities for day-to-day operations surrounded by folks doing menial work for poverty wages. If the manager wants to take some of the stress off, he or she must convince people making less than half as much to cover some of the management work. Arguably, this is as difficult as trying to get a for-hire manager to run a business as if they owned it.

Perhaps car wash operators should consider tearing a page out of the micro mini-mill playbook. For example, dividing the labor burden of $250,000 by five equals $50,000 per person. Backing out payroll expense provides annual compensation of $42,000, which is about $20 an hour based on 2,080 hours.

This level of pay would be sufficient to attract people who would qualify for entry-level position such as auto service advisor, auto mechanic, administrative assistant, management trainee, etc. In other words, people who are more capable.

Pay a salary instead of hourly wages, and a 50-hour workweek across five persons would provide 250 hours of coverage. Implementation would require cross-training employees on all duties and responsibilities. Employees would take turns at each workstation throughout the day.

Finally, this would be capped with a profit-sharing plan as an incentive to increase employee morale, productivity, job satisfaction, and the company’s bottom line.

McDonald’s continues to refuse to pay workers a $15 an hour minimum wage and has become a target of the $15 movement. Recently, McDonald’s formed a partnership with DoorDash, the food delivery service. Subsequently, the $15 movement opines that McDonald’s move will only increase the workload for its already underpaid workers. The movement underscores this by saying McDonald’s raked in $5.9 billion in profit in 2018 and DoorDash is valued at over $12 billion. 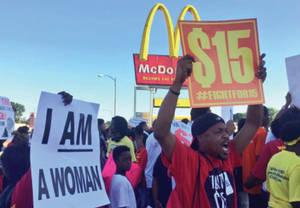 Reportedly, McDonald’s has 13,000 stores in the United States — 6,000 are company-owned locations and 7,000 are franchises, mostly area developers. So, it’s not the franchisees that make billions rather it’s the corporation.

According to McDonald’s former CEO Ed Rensi, “It’s cheaper to buy a $35,000 robotic arm than it is to hire an employee who’s inefficient making $15 an hour bagging french fries.” He explained that increasing employee wages could possibly take away from entry-level jobs one day.

We’ve already seen a lot of automation in the car wash industry with self-serve pay stations, online products and services, and self-serve vacuums.

Today, an operator can keep tabs on a wash with a dashboard. There are third- and second-party companies available that can take much of the work out of managing subscription programs and social media. There are also a host of web-controlled applications available for Ethernet and Wi-Fi I/O products that allows for remote monitoring and control of devices.

In the final analysis, a living wage would be difficult to offer for many operators especially those that provide assisted-services or have a large network of stores.